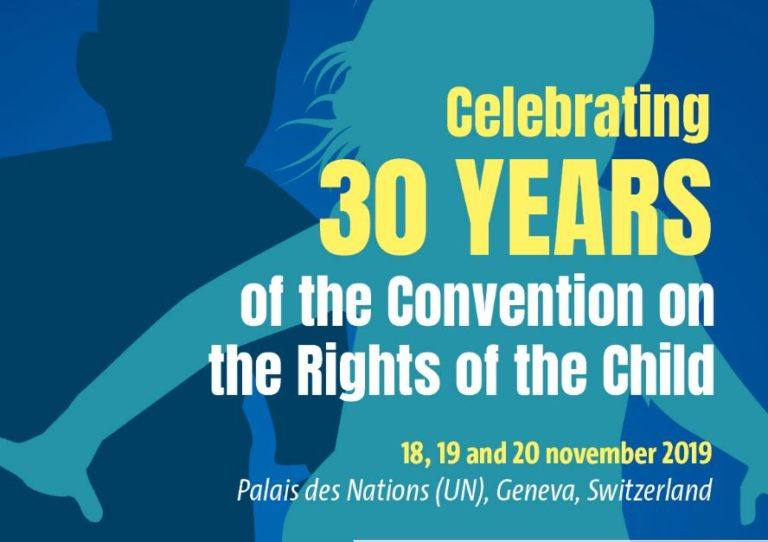 The Convention on the Rights of the Child protects the right of all children, everywhere, to be free from discrimination, violence and neglect. It means that, for example:

Children have human rights and they should be empowered to claim them. Thirty years ago, the Convention recognised children as their own beings entitled to non-negotiable rights. Nearly all Governments – to the exclusion of one – have pledged to respect, protect and promote those rights. This makes the Convention one of the most visionary and universally accepted human rights agreement in history.

This anniversary creates a momentum for the international community to step up its efforts to make children thrive, and to renew their commitment to protect and promote all their human rights. While notable progress has been achieved in the past three decades, significant challenges remain, in particular for girls, children with disabilities and children in disadvantaged and vulnerable situations.

Let’s realize the timeless vision of all human rights for all children: getting closer to ending child poverty and enhancing child survival; ending child marriages and increasing the number of children enrolled in schools; ending children’s social exclusion and fostering their equal access to essential services; no longer silencing children and instead letting them participate meaningfully in decisions that concern them.

Let all children thrive! Let us stand, alongside them, for their human rights!

The Convention was adopted by the UN General Assembly on 20 November 1989. As we lead-up to the Convention’s 30th birthday, a series of event will be organized in celebration.

The Committee is grateful to the European Union and the State of Qatar, as well as its partners Enfants du monde, Child Right Connect and UNICEF for their support to its celebration of the anniversary.

The Committee on the Rights of the Child, which is the body in charge of monitoring States compliance with the provisions of the Convention, is encouraging States parties to renew their commitment to the Convention by pledging to take one specific and measurable action for the promotion, protection and realization of the rights of the child. On 8 March, the Committee requested Member States to provide information to the Committee on their commitments with respect to children’s rights, as well as national initiatives, in celebration of the 30th anniversary of the Convention. Member States were invited to use this template (also available in French and Spanish). The information received from Member States will be widely communicated on.

States are also invited to join the UNICEF global pledge “For every child, a right”.

The Committee is also supporting the various initiatives of its partners to celebrate the anniversary.